ABS: “In twelve and a half years we have never been disappointed by Van Duuren’s service.”

“The people in Vianen have the capability of reacting in a flexible and customer-oriented manner to new situations,” states Wouter Kothuis, Director Operations at ABS. In a market in which shorter delivery periods are becoming increasingly important, a haulier must be flexible, swift and reliable, according to Kothuis. “In the twelve and a half years that we have been working with Van Duuren they have never disappointed us.”

“In the last three years, doing business via the Internet has expanded enormously in our sector,” reflects Kothuis. “In this period, the volumes that we supply to online shops have increased five-fold. We used to send these consignments via parcel delivery services, but for years now that has no longer been an option. Van Duuren has taken over a large share of this transport.” One result of the growing turnover via the Internet that Kothuis has experienced in practice is that the delivery periods are coming even more under pressure. “Most online stores are finding that it’s most important that they stick to the delivery periods advertised on their websites, even if it is only to ensure that they don’t get negative reviews. This is why we also need to be able to count on a carrier that’s reliable and keeps their promises. I believe that this is one of Van Duuren’s strong points. And of course it is fine that Vianen is just around the corner from our warehouse in IJsselstein.” 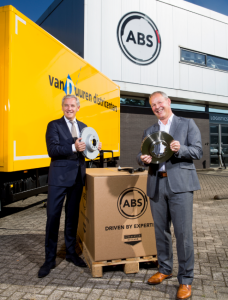 Dedicated service
“I think that ABS and Van Duuren have together experienced very organic growth,” adds Stef Blommaart. “Of course we also noticed that the market via Internet was playing an increasingly large role in the business of ABS, and in consultation with them we adapted our own route planning to match this.” According to both Kothuis and Blommart a striking example is an online company in Germany that began as quite a small player in the market, but which can now be counted among the key accounts of ABS. “We have set up a special dedicated service for this client,” Blommaart continues, “in which we load at IJsselstein at about 5.30 p.m. and unload in Berlin at 10.00 a.m. the following day. This is the best solution for ABS and for us as it involves large volumes, easily seven to eight pallets that are really heavy. For this service we always use a truck that can carry at least 2000 kilograms.”

Pan European
The collaboration has also been intensified in other areas, says Kothuis. “We began with transport from Italy to the Netherlands, but nowadays Van Duuren is responsible for both exporting and importing our goods to and from large parts of Southern, Northern and Eastern Europe. Every day there are trucks departing for us to and from Vianen. We have been through quite a lot together, which means that we also work very well together. If things start getting hectic at our end nobody gets in a panic, as there’s always a solution to be found. I think that this is one of the biggest advantages of such a close partnership.”