Jasper van Duuren, after having studied business economics, joined Van Duuren in August 1985 as the head of administration & computerization. After this, he fulfilled various management functions, and after five years became financial director. Finally, in 1993 he and his brother Jeroen bought the shares of Van Duuren Districenters and he became joint managing director with his brother.

The company has grown considerably in the years that followed, the Warehousing division undergoing great growth and professionalization.
His biggest challenge? Jasper: “Searching for the best possible computerized solution for a logistic challenge.” 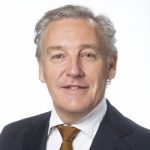